Periodontitis – A War on Teeth and Immune System 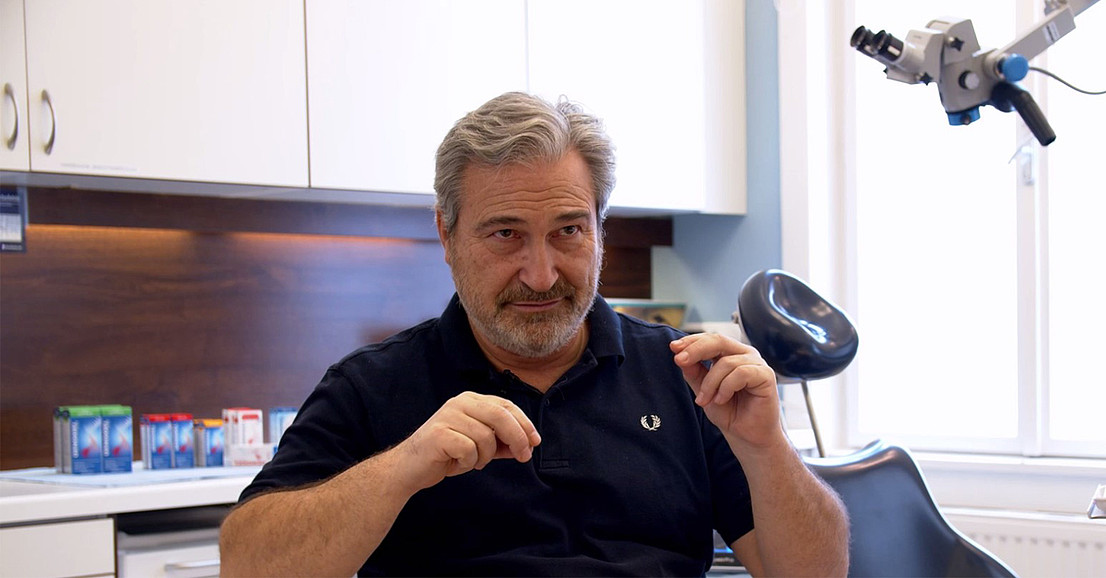 The known disease of periodontal tissue does not only cause loss of teeth, but impacts the immune system as well. Periodontitis caused by oral bacteria strongly affects the health of the whole organism and increases the risks for stroke, heart attack, kidney disfunction and premature birth in pregnant women. Therefore correct care, and in case of wounds and scars in the oral cavity also the use of appropriate anti-inflammatory preparations, are of extreme importance for the health of the teeth and the whole immune system, emphasizes the famous Vienna stomatologist, Assist. Prof. Peter Solar, DMD, PhD.

It does not hurt, it does not always cause bleeding of gums and no, it is not the only possible reason for bad breath. However, periodontitis, a dangerous infection of periodontal tissue, is still in majority of the cases responsible for the loss of teeth. The gap between the bone and the tooth root is an excellent place for growth of very aggressive bacteria which tightly hold onto the tooth neck at the place where the tooth crown rises from the inflamed gums.

Periodontitis is a very treacherous disease which occurs in 60 to 80 percent of people older than 40 years. “Periodontitis is a disease which primarily affects the mouth, but in mouth we have an unbelievable number of blood vessels, therefore the bacteria from the mouth may enter the blood vessels and cause an inflammation elsewhere in the body. All blood vessels are connected, so the whole organism is affected if periodontitis is present. Additionally, if a woman is pregnant, the disease may harm the child as well. If the bacteria come from the mouth into the circulatory system and tissues, it may come to an exchange of diseases, and the risk of a stroke increases. The risks of a heart attack, kidney disfunction and premature birth in pregnant women also increase,” explained Dr Solar in an interview in Vienna.

Swellness, redness and bleeding of gums

Inflammation of gums (gingivitis) and periodontal tissues (periodontitis) are caused foremost by oral bacteria which accumulate in dental plaque, the latter being a consequence of incorrect dental care and insufficient dental hygiene. If we do not remove dental plaque regularly, bacteria in it produce substances which are harmful to the gums. The inflammatory processes first manifest as swelling, redness and bleeding of gums, but later they penetrate deeper and cause the disease of tooth sockets, consequently causing destruction of connective tissue and jawbone, which may lead to teeth falling out.

Healthy gums do not bleed

“Healthy gums do not bleed,” emphasizes Dr Solar. “Never. Healthy gums do not bleed. You can bite an apple, brush your teeth, get your dental impression taken at a dentist, yet healthy gums will not bleed. However, not every bleeding is a sign of periodontitis. The cause may also be gum inflammation, called gingivitis, which may be a precedent of periodontitis, but is reversible – the condition can be cured. Periodontitis also means loss of bone tissue around the teeth which unfortunately cannot be recovered. Periodontitis therefore causes irreparable damage, and gingivitis can be treated. The symptom they have in common are bleeding gums.”

Healthy gums do not bleed. Never. You can bite an apple, brush your teeth, get your dental impression taken at a dentist, yet healthy gums will not bleed.

Put a toothbrush to good use once per day, but do it thoroughly

The best prevention against periodontitis is regularly brushing your teeth. As explained by the popular Viennese dentist, consistent and correct brushing of teeth once per day is enough to keep teeth healthy. “We were taught to brush our teeth twice, thrice per day or after every meal, but all of this is not necessary! We must clean our teeth correctly once in 24 hours. Why do I say this? Because we have known this since the 1970s, 1980s. The fact is that the first signs of an inflammation in the mouth appear in 24 hours at the latest, meaning that the immune system cells from the blood vessels are moving into the tissue and try to create order in it. If we regularly clean and remove all dental plaque, the lymphocytes will not enter into the tissue as there are no sings of inflammation in it and the disease is not progressing.”

We were taught to brush our teeth twice, thrice per day or after every meal, but all of this is not necessary! We must clean our teeth correctly once in 24 hours.

The most important preventive measures against periodontitis or its worsening is conscious and structured removal of dental plaque. “Removal of dental plaque is not only necessary on the outer side, but on all sides of a tooth, as well as in space between the teeth. Every tooth has five surfaces, and there are at least 28 teeth. In our mouth we have at least 140 surfaces and for their correct cleaning we need 6 to 8 minutes.

We clean every tooth consciously. There are all sorts of too big toothbrushes available in stores with which the brushing is faster, but this is not the way to do it. Use the smallest toothbrush you can find and brush with it thoroughly. It will take a bit longer, but it will be more efficient. The head of the toothbrush should be as soft as possible, do not use the brush with too much pressure, but grab it with your fingertips firmly enough to hold it and so that the bristles can do their job. I therefore recommend daily brushing with an electric toothbrush from 6 to 8 minutes in one go.

Good dental care and oral hygiene twice a year ensure almost completely that your teeth will stay healthy for their whole life. Besides a good toothbrush, you also need dental floss for cleaning the interdental space. This is the best protection of oral health!”

Numerous patients ask him for advice whether they should rinse their oral cavity with a disinfectant as well, but Dr Solar replies that this is not necessary. “Gums in the mouth have an incredible ability to regenerate and need support with appropriate products only if problems occur. If there are aphthae or other injuries in the mouth, one of really good substances is hyaluronic acid.” It is a natural substance which is a physiological component of connective tissue, and speeds up healing of wounds and scars, relieves swellings and has an anti-inflammatory function.

Medis’ Gengigel medical devices are based on hyaluronic acid and therefore in experience of Assist. Prof. Peter Solar, DMD, PhD, represent excellent first aid for occurrence of wounds in the oral cavity. “In such cases Gengigel does an excellent job, as it creates a filter, protects the wound, reduces pain and encourages healing. This is beneficial if it comes to an injury or gingivitis with bleeding. Keep it in your medicine cabinet and together with a toothbrush regularly take it on your trips.”