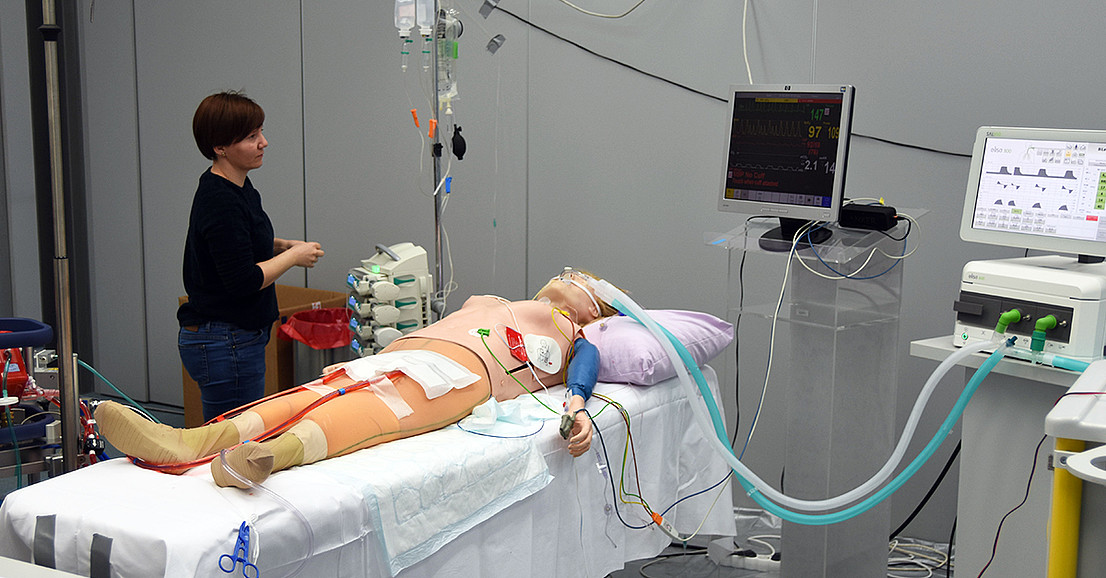 In February, March, May and June this year, Medis hosted four two-day workshops of the ECMO simulation team, which introduced the method of extracorporeal membrane oxygenation – ECMO, to the healthcare professionals from intensive care units.

The first day the participants got to know the theoretical basics of the ECMO method and how to work with the Cardiohelp device, and the next day a practical simulation learning in different clinical scenarios took place. The execution of the seminar was a truly great challenge for Medis, since as the host of four educational meetings and in collaboration with the Department of Intensive Internal Medicine of the University Medical Centre Ljubljana we needed to set up a simulation centre with a control room, where the participants could get to know and test the use of the ECMO method with a practical innovative simulation of different clinical scenarios.

Educational workshops on a high professional level equipped the participants with new knowledge and skills, as well as gave them the necessary confidence to use the ECMO method in their internal practice. Medis has proven itself once again as not only the lead representative of medical devices, but also as a reliable partner in execution of very much needed trainings of healthcare professionals, and also as a messenger of enthusiasm and teamwork, who plans similar educational workshops with international participants in the future. 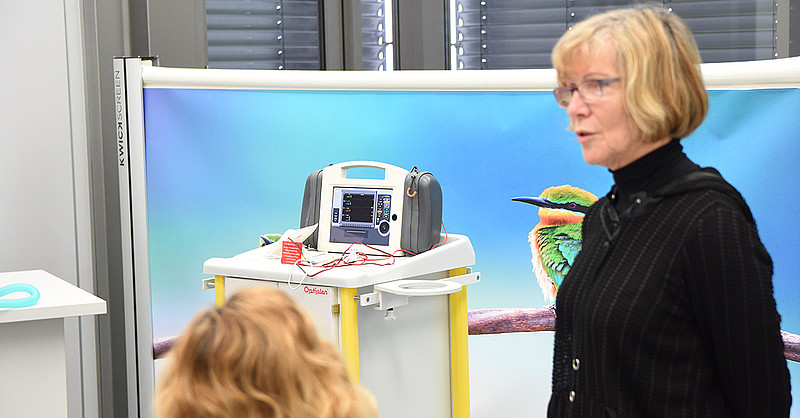 ECMO is a standard technology of extracorporeal blood circulation which was primarily used in open-heart surgeries, and it ensures circulatory support by creating a continued, non-pulsating minute volume and at the same time also respiratory support with extracorporeal oxygenation. The extracorporeal membrane oxygenation started being used in 1960s, when the system started to be used as an overcoming during open-heart surgeries. Later its use spread also to postoperative treatment and treatment of respiratory failures which could not be controlled with standard procedures.

Studies at that time did not show improved survival rate when using ECMO in adult patients, so its usability established itself foremost in treatment of respiratory failure in newborns and children. New studies, combined with improved materials, technology and especially the way of treatment in the recent years, show favourable results in adults as well.

The ECMO method has re-established itself with the increased number of patients with respiratory failure when the pandemic flu appeared. If therefore a patient has a cardiac arrest, if their lungs fail or both organs fail, we can withdraw the blood from the body, add oxygen to it and then return the blood to the body. We maintain life in this way.

How does the ECMO system work?

How was your simulation team created?

ECMO is an extremely demanding method of treatment, suitable for a small group of patients whose life is threatened and whose chances of survival are lower than 20 percent. A centre which controls all forms of use of this technology and has included the transport of patients to ECMO, our centre is like that as well, needs to have regular trainings which meet international standards. Doctors and graduate nurses, that is, everybody who works with patients in intensive internal medicine, need to attend such trainings twice a year. After a completed training they have to pass an exam as well.

All members of our simulation team took classes about the ECMO method abroad, but we got the feeling that these trainings did not provide enough practical experience for working with the device and the patient. Occasionally we also met a patient on these trainings as well, but there was little direct use of the ECMO method. This is why we formed our own way of educational training in our department. This training is carried out by the simulation team, in which four doctors and four graduate nurses are included.

This training takes place on three levels. The basic level is meant for those healthcare professionals who have no experience with ECMO. This is foremost theoretical training with some technical information about the working and operating of the device. The second education module is less theoretical and far more practical, with a presentation of various possible complications, such as device malfunction, which could mean death of the patient. In such cases the healthcare staff must recognize the complication and react appropriately. This is why these trainings are extremely important. The third level of education is completely practical. We form a team of two doctors and two nurses, who then get a simulation of a real patient and a clinical scenario and which they must overcome as a team, make concrete decisions and react correctly.

You formed this innovative training at the University Medical Centre Ljubljana; something similar, as you say, is not available abroad.

Correct, this is our innovation. So far, I have been on various trainings and in general most of them where more or less theoretical. Even though those were big medical centres, such as in Paris or the Karolinska Institute in Stockholm. Training at the Karolinska Institute took four days and we gained a lot of theoretical knowledge, also some hands-on knowledge, but still not a lot. This is why our simulation workshop is truly our innovation. I am not familiar with a case where a training for ECMO included so many simulations as we have in Slovenia.

This year marks a 10-year anniversary since your introduction of the ECMO method in your department. How did the method prove itself in practice?

Yes, we are celebrating already the 10th anniversary. We are all proud, of course. At the beginning, when we were introducing ECMO, there was severe resistance in the department. Patients were coming, we needed to work after the “whether you know how to do it or you do not know how to do it, just do it” principle. It is often like that. And from this our trainings developed. The nurses said: “We will not do it anymore if we do not know how to do it.” Which was true. This is how we started with the very much needed regular training four or five years ago. At first this was only theoretical training so the colleagues got familiar with what the method enables and how does it do it, and they gained a lot of new knowledge. Then we said, what if we formed a simulation centre. But it did not go without complications, the simulation could not be carried out because we had no money to buy these big systems.

Together with a colleague we then prepared a plan of what we needed, how these simulations would be carried out, another colleague put it into a computer, for the main part we prepared the whole programme by ourselves. Even with the dummy, if you open the upper part, you can see that it is made in such a way so we can insert a needle. A colleague made a model in which he put two tubes which represented veins, and we can monitor these “veins” with ultrasound, so the participants can look at it and pierce the vein. There must be standard models as well which are prepared for such simulations. But we designed our “model” by ourselves and it enables us to go through all possible scenarios which can happen when treating a patient on ECMO. 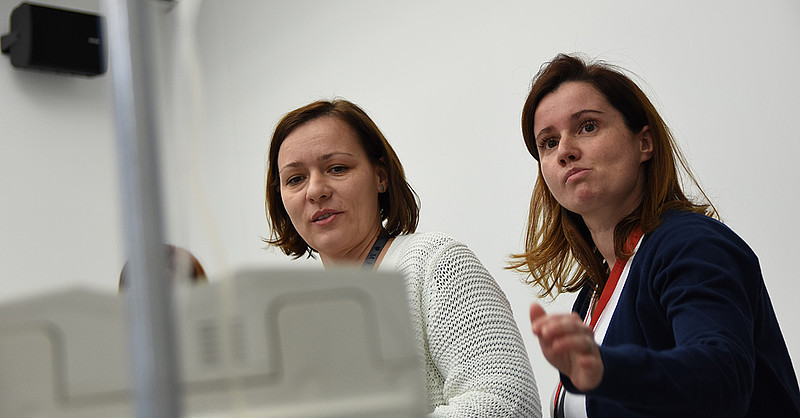 You presented this innovative practical simulation of different scenarios of a patient on ECMO also to colleagues from abroad.

Until now, we have invited a few representatives from abroad who sell these devices and they were absolutely thrilled. They are interested in us organizing simulation workshops for the whole Eastern Europe. How far has this project come, I do not know at the moment. We asked the University Medical Centre Ljubljana for research funds, which we have received, and so we could buy some extra materials, as one simulation set costs 2,000 Euros. The Getinge company lent us a device for the purpose of carrying out simulations, as both devices from our department are in use at the moment.

This year we are planning on presenting ourselves at the simulation congress, but otherwise we have quite a few lectures and presentations of a part of our simulation team in the ex-Yugoslavian countries. We collaborate with colleagues from Bosnia and Herzegovina, to which we helped introduce ECMO in their country as well, I gave lectures in Serbia, Croatia, Macedonians also were interested. All in all, I am glad of good collaboration and knowledge transfer.

In Slovenia we have around 40 to 50 patients on ECMO per year. We have most of them during the time of seasonal flu, which can be joined by severe pneumonia and which patients would not survive without the help of extracorporeal membrane oxygenation. Treatment with ECMO usually lasts for a week or two, and the longest a patient can be on the device is two months.

You mentioned before that there are not a lot of patients who need ECMO treatment. Today we saw different simulations, but how does an actual treatment of these patients look like?

In Slovenia we have around 40 to 50 patients on ECMO per year. We have most of them during the time of seasonal flu, which can be joined by severe pneumonia and which patients would not survive without the help of extracorporeal membrane oxygenation. Treatment with ECMO usually lasts for a week or two, and the longest a patient can be on the device is two months. During the year we have fewer of these patients, but we still treat patients who are candidates for lung transplantation and whose condition has worsened. These patients then go to Vienna and we help them with their helicopter medical transport.

Treatment with ECMO is also needed by heart patients whose heart fails due to a heart attack or myocarditis infections, and by patients who are waiting for a heart transplantation. The third option of using the ECMO method is as support when resuscitating patients in which it is not possible to establish a circulation in a certain time period. By connecting the patient to ECMO, they can in some cases survive until the heart activity comes back. 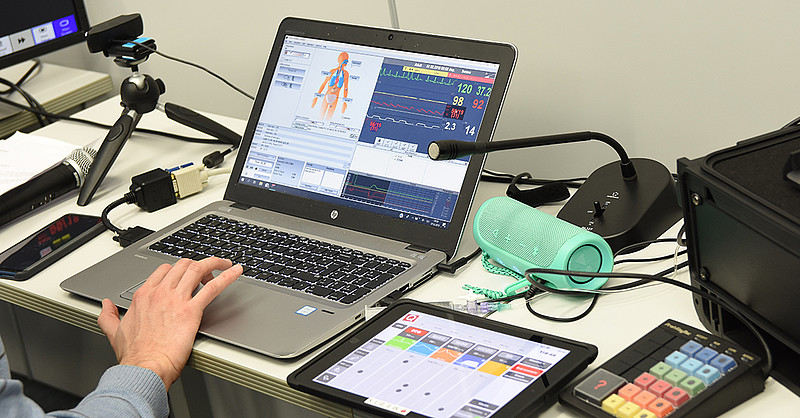 What are the most frequent complications of this invasive method of treatment?

We recognize the most frequent complications quickly and can solve them with certain manoeuvres on the device. The most difficult situation is if clots appear on the membrane which ensures the oxygen exchange. And recently our device completely unexpectedly stopped working. In such a case you always need a substitute one. Every patient therefore actually needs two devices, since in case of device failure for ECMO, which substitutes the working of heart and lungs, the patient dies.

How long does it usually take to stabilize the patient with this intervention procedure of connecting to ECMO? 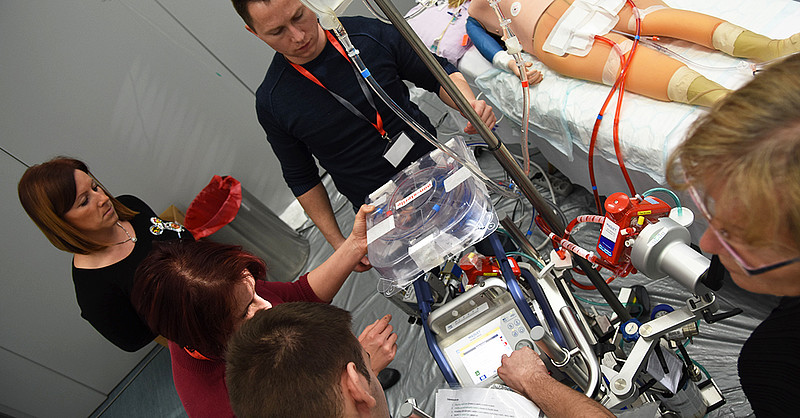 By gaining experience and additional knowledge, the extracorporeal support treatment is becoming more and more a part of everyday intensive treatment of adult patients, but considering the invasiveness of the method, possible complications and difficulty of managing such patients, this kind of treatment is limited to an experienced centre with a possibility of suitable monitoring and quick interventions, should it come to complications. Such are also the recommendations of the Extracorporeal Life Support Organization, and we have such a centre in Ljubljana. In Slovenia the method is not yet recognized and paid by the Ministry of Health and the Health Insurance Institute of Slovenia.