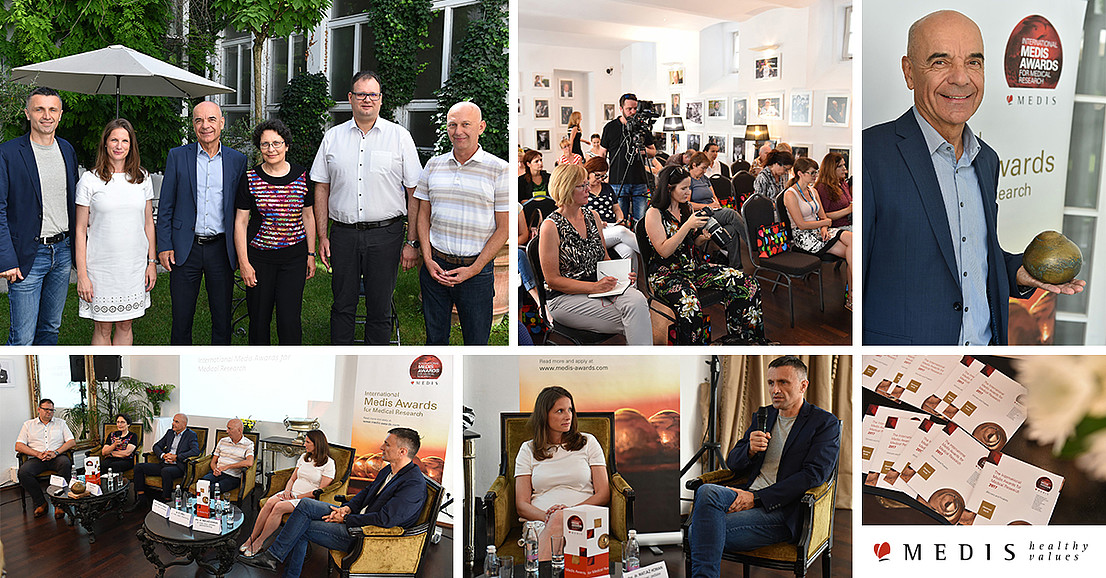 At a conference titled Five Years of Recognizing Excellence – Medis Awards, experts spoke about the importance of honoring excellent medical achievements and the promotion of positive stories in healthcare. With much criticism and several negative publications in the media, there is ever more unfounded distrust and doubt about the professionalism of our doctors and pharmacists. The speakers concluded that the top achievements of Slovenian professionals abroad are very poorly recognized in Slovenia. All participants of the meeting agreed that public praise and awards are important in order to improve the reputation of Slovenian medicine.

It is for this reason that the International Medis Awards for Medical Research, which is currently in its fifth year in Central and South-Eastern Europe, is a welcome approach to the recognition of excellence. The independent panel, composed of experts from seven countries, relaunched the scientific research competition for doctors and pharmacists. In addition to their regular clinical practice, they must investigate and develop advanced methods of diagnosis and treatment which render special meaning to the Medis Awards.

The Medis company is the initiator and donor of these awards, which were founded on the company’s anniversary. Tone Strnad, founder of Medis, explained the decision to award excellence in the industry: “After 25 years of successful work in medicine and pharmacies, we have found that there are many exceptional stories of research written by doctors and pharmacists. However, their research achievements remain largely unnoticed and unrecognized by the general public. We are convinced that they deserve recognition, as they significantly affect the development of diagnostics and treatment.”

The project has been exceptionally well received by the professional public. During the past four years, more than 560 scientific researchers applied for the Medis Awards, with the independent panel awarding 38 awards.

The difficulties of Slovenian doctors and pharmacists

The importance of disseminating good practices and positive stories in health care is all the more important given the fact that the Medical Chamber of Slovenia is facing the departure of white robes to work abroad. According to last year's data, 163 doctors left Slovenia. There are probably many reasons for this. However, society’s attitude to the profession is reflected by modest public recognition. “We believe that there is more excellence in our healthcare system than seems apparent and that our doctors and pharmacists are among the top experts. In the future, we will hear about the recognition of positivity in medical science and the importance of promoting continuous education, as the situation in this field is improving. Recognitions such as the Medis Awards are certainly an important element in discovering the value of our doctors” said Dr. Zdenka Čebašek-Travnik, president of the Medical Chamber of Slovenia, who is convinced that good stories are written with the help of the media.

The situation is no better for pharmacists, who face poor working conditions and low incomes in Slovenia. Foreign countries are of increasing interest to them, as they do not always have the feeling that the pharmaceutical profession is valued domestically. “Above all, we should not equate healthcare anomalies with the work of individuals. The successes of our pharmacists show the excellence of people working in the pharmaceutical profession and are not related to scandals in healthcare policy,” added Matjaž Tuš, president of the Pharmaceutical Chamber of Slovenia.

The independent commission of jurors for the Medis Awards has noted that in recent years the number of applications made by Serbian and Croatian experts has exceeded the number of applications by Slovenian medical personnel. However, Slovenian studies are of exceptional quality, and we may still boast that our doctors and pharmacists have the highest number of winnings in the region. Prof. Matija Tomšič, a rheumatologist and long-time president of the Medis Awards, is very aware of this and hopes that the number of awards in medicine will increase in proportion to the number of awards in culture. “There is no greater enthusiasm than the recognition of work performed in a garage, it is always motivation for additional achievements in the profession.”

An expert panel will take under consideration received contributions with an impact factor greater than 1.5, which means that the research work was published in a reputable foreign professional magazine. After September 15th, they will review all of the entries received, select finalists and one winner from each selected research area. More info: www.medis-awards.com.

Dr. Matjaž Homan, a pediatric gastroenterologist at the Pediatric Clinic in Ljubljana, was the first in the world to discover that it is considerably better to use carbon dioxide than air for children who need to undergo colonoscopy. In 2015, he published the results of a study in the American medical journal Gastrointestinal Endoscopy with an impact factor of 6.5 and also received a Medis Award. “In view of the positive results of the investigation, the method was immediately introduced into clinical practice, so that in recent years, colonoscopy in children in the pediatric clinic is only performed with carbon dioxide, which means less pain for children,” explained Dr. Homan, adding: “To receive the award is a great honor for everyone and it provides additional motivation for further clinical research. By doing so, I can better help sick children, which of course is of greatest importance.”

Ophthalmologists Dr. Alja Črnej and Dr. Vladimir Pfeifer, from the Eye Clinic in Ljubljana, performed the first transplant of an artificial cornea in Slovenia, which was a remarkable medical success. Artificial corneas have already been used outside Europe, but have been used in Europe only for research purposes. The CE mark, which is a prerequisite for use in Slovenia, was obtained last year. Prior to that, the doctors tested the procedure on mice, receiving a 2015 Medis Award for the study. The greatest success was felt by a patient who was blind for 20 years due to eye damage. Dr. Črnej explained the achievement with the perceptions of the patient: “For the gentlemen the trees are green again, he is able to see the clock at the end of the corridor and is living a much better quality life, which is a happiness and joy.” She also noted that more than a year after the implantation of the artificial cornea, the patient had no major complications. The ophthalmologist also sees the award as confirmation that the work was done well and qualitatively, but critically evaluated that: “Successful Slovene individuals are happily recognized abroad. But this does not mean that we accept and acknowledge them in our country, which is a great loss for the progress and development of Slovenian medicine. That's why the Medis Awards are very welcome as a rare a domestic praise.”

The Medis Awards professional commission receives the fewest applications from the field of ophthalmology, so Dr. Črnej hopes that young Slovenian ophthalmologists will more often co-create top achievements in the future.

New research and new medical hopes are encouraged and welcomed by patients who attended the conference. Together with the profession, they found that the role of the media and patient societies is to actively participate in informing the general public about good practices in medicine and to help with modern treatments in healthcare.

This year's 2018 Medis Awards will be held in Sarajevo on November 29th. Prizes and awards for finalists are a novelty. We have faith that at the end of the year we will be able to applaud outstanding experts and their novelties, which will surely build upon clinical practice in the future.